The YouTube star-turned-boxer is not happy about Mayweather's latest choice of opponent.

Jake Paul is not a fan of Floyd Mayweather’s latest choice of opponent inside the boxing ring.

It was recently announced that Mayweather will return for yet another exhibition boxing bout against YouTube star Deji.

The fight will take place in Dubai this November. Jake Paul, a YouTube star-turned-boxer who has been making quite the name for himself in the boxing community, took to Twitter to post a video, reacting to the news.

Paul said Mayweather continues to tarnish his legacy by selecting weak opponents that Mayweather himself isn’t even familiar with.

He instead challenged Mayweather to fight him, agreeing to meet halfway in between their own weights. Paul is desperate to hand Mayweather his first loss of his career.

“He doesn’t even know the names of the guys he’s fighting – and then he chooses to fight Comedy Shorts Gamer, influencer, to make some money to pay his tax bills.

“Floyd, I will fight you, and you know that’s one of the biggest fights to make in boxing. I weigh 175, you weigh 165, we can get that done. Make a couple hundred million dollars, but what will your excuse be?

“But You’re going to find a way to dance around this. You said, ‘Once he fights a professional fighter he’s going to get destroyed or it’ll be bad for him. Why not let that be you? The best ever, there’s only one Mayweather.

While Mayweather is slated for a November return to the ring, Paul also has a date set as well.

Paul will face his toughest test yet on October 29, when he fights UFC legend Anderson Silva on pay-per-view (PPV). Should both Mayweather and Paul emerge victorious, perhaps they will be gearing up for what would be the biggest boxing fight of the year. 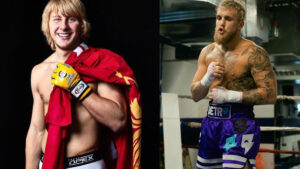 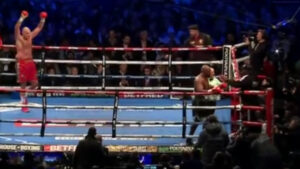