It is the boxing bout between two of the top three boxers in 160 lbs weight class. In his last two fights, Canelo earned two victories. In a highly anticipated rematch, the Mexican superstar defeated Gennady Golovkin for the WBA and WBC middleweight titles and later destroyed Rocky Fielding to become the WBA regular super middleweight champion.

Jacobs comes off a split decision win over dangerous Ukranian Serhiy Derevianchenko, where he claimed IBF middleweight title. Prior to that, he outpointed Luis Arias and Maciej Sulecki.

The referee in charge for this contest is Tony Weeks. The match is underway!

Good start of the bout. Jacobs comes up short with jabs, and Canelo presses him against the ropes. Good right to the body Jacobs, Canelo fires back with a punch to the mid-section. Canelo lands another cross to the stomach, 1-2 Combo lands for Jacobs. The end of the round, 10-9 Jacobs.

Jacobs goes for a combo, bouncing off guard. Fighters clinch up, and Canelo attacks the mid-section. Fighters trading jabs, Canelo goes for body shots, while Jacobs trades to the head. Clinch.

Canelo presses forward and pushes his rival on the ropes. Body blows on both sides, and an outstanding right hand of the clinch by Canelo Alvarez!!!

Left hook to the body, followed by a combo on the ropes. The Mexican superstar controls this round. Canelo attacks with jabs to the body, Jacobs counters hard, great exchange. Fighters clinch up. The end of the round, 10-9 Alvarez.

2-1 lands for Canelo, Jacobs goes for jabs. Canelo attacks with a body combo, but Jacobs fires back with a combination. Alvarez ducks well.

Jacobs attacks to the mid-section of the clinch, and another clinch. The referee warns fighters for illegal punches. An uppercut, and another clean jab. Right cross Canelo, jab followed by a left hook. Left punch to the head Jacobs, but countered well by Alvarez. 10-9 Alvarez.

Jacobs trying to work behind the jab, Canelo slips, but Jacobs punishes him with a punch to the body. A left hook to the body Jacobs, and another body shot, this is a different fighter ladies and gentlemen, Jacobs changed his strategy in this round!

Canelo goes for a four-punch combo, lands to the body. Good jab, Canelo lands a body shot but eats a big uppercut. Right hand to the body, great exchange at the end of the round. Unsure who won this one.

Jacobs goes for a massive punch combo, but Canelo parries all the strikes. Great punches from Jacobs, one strike landed clean to the head.

Straight left punch, but Canelo fires back with a good right hand to the body. Fighters clinch up, but Jacobs pivots and delivers two blows to the mid-section, then separates. Three-punch combo lands clean. 10-9 Jacobs.

Alvarez wants to brawl, and attacks to the body, pushing his rival against the ropes. Left cross Jacobs, and body shot, but countered by a left hook. Jacob misses with a big overhand.

Jacobs switches stance back to orthodox. Canelo attacks to the body left hook. Jacobs attacks with a lot of jabs to the head.

Body shots are traded in the center of the square ring. Canelo lands left hook, Jacobs moves away. Jacobs presses him against the ropes, trying to land some clean strikes.

Right hand Canelo, but he eats a combo too. Left hook Jacobs. Uppercuts from Canelo, straight right, followed by body shots. This is a great fight! Jacobs continues attacking and Canelo ends up on the ropes again. 10-9 Jacobs.

Awesome counter hook, and a four-piece combo, amazing! Big overhand left Jacobs. Canelo continues to move and eats another uppercut. Canelo attacks to the body but eats a big blow to the mid-section a few moments before the bell. 10-9 Jacobs.

Jacobs is still in a southpaw stance, lands few big shots on the ropes. Fighters clinch up. Canelo delivers body blow, Jacobs fires back with a combo. Jacobs switches to orthodox and attacks with jab combo, while Canelo lands a hook.

Excellent punches by Jacobs, he fires hard. The combination on the ropes, Jacobs attacks to the body and head, Canelo could be in trouble. Fighters clinch up, but Jacobs keeps using the same strategy.

Jacobs attacks but eats left counter to the body. Great 1-2 from the Mexican superstar. Hard jab, countered by a brutal hook from Jacobs. Canelo lands another clean right hook, but Jacobs forces him to retreat. Canelo ends up on the ropes but counters Jacobs with a spectacular combo. I’d say 10-9 Canelo.

Awesome exchanges to start the round.

Hard hook, 1-2 Canelo, Jacobs goes for a strong left hook but misses and falls down!!!

Left hook and jab Canelo. Right punch to the body Jacobs. Wonderful combinations on both sides, this is turning into a wild brawl!!! Left hook Canelo, it seems Jacobs is wobbled!

Jab exchange on both sides, Jacobs continues moving. Canelo lands a strong uppercut. Jacobs attacks to the body and clinches up. Left hands Jacobs, countered by an uppercut.

Canelo delivers a jab, Jacobs presses forward. Both fighters trading big blows. The end of the round, unsure who won this one. 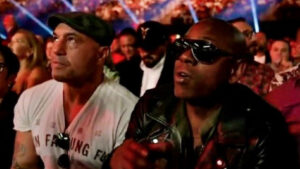 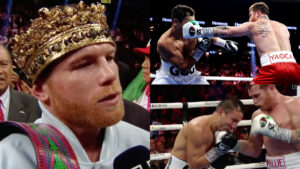 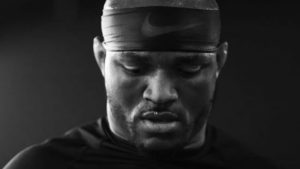 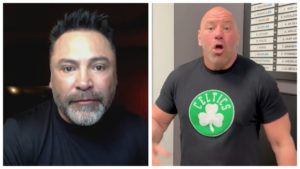