Fedor Emelianenko Defeats Chael Sonnen Via First-Round TKO And Advances To The Finals!

Here we are from NYCB Live in Uniondale, New York. Bellator 208 main-event brings the second Heavyweight Grand Prix Semi-Final between PRIDE legend Fedor Emelianenko and the former UFC superstar Chael Sonnen. The third man inside the Octagon is Dan Miragliotta.

Sonnen goes towards the center but eats a punch.

Great Knock Down For Fedor!

Fedor lets The American Gangsta stand up. But delivers a great left hand as Sonnen gets up. Sonnen goes to his back but Emelianenko didn’t use the chance to go on the top of him. Fedor blocks the shot, ending up in the half guard, then goes up.

Sonnen tries to shoot in but ends on the ground instead. Yet, Sonnen succeeds to perform a takedown. He is trying to get a hook but The Last Emperor surprises him as he was trying to pass him. Fedor now on the top of Sonnen landing some heavy shots. Fedor in the side control, but he is standing back up at the halfway point. Good right hand by Fedor.

Sonnen hits the chin with his left hand. Emelianenko’s right hand was too slow, he misses a target.

Emelianenko defends well, he doesn’t let Sonnen get on top of him. Emelianenko with a world-class sweep, he ends up on the top of The American Gangsta! Fedor backs out a little bit. Sonnen threw his right hand but Fedor hammers repeated lefts. Will Sonnen survive this tremendous barrage? No, he won’t! Dan Miragliotta stops the fight at 4:46, what a victory for Fedor Emelianenko!

Fedor Emelianenko improves his score to 38-5, 1 NC MMA, 2-1 BMMA, while Chael Sonnen drops to 31-16-1 MMA, 2-2 BMMA. What a dominant victory by Fedor Emelianenko who advanced to the tournament finals! 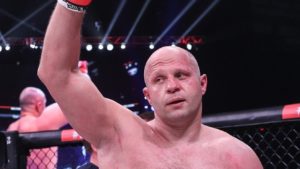 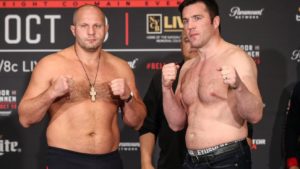 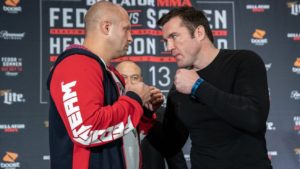 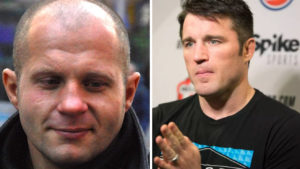