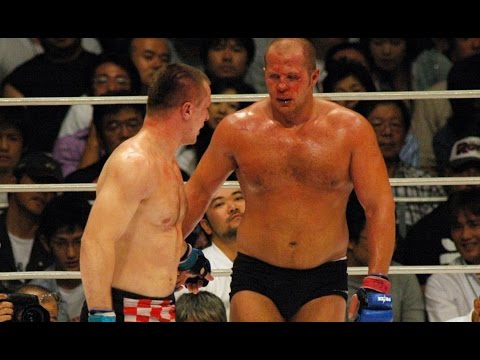 MMA legend Mirko “Cro Cop” Filipovic may have signed with Bellator, but don’t expect to see him rematch Fedor Emelianenko.

“Cro Cop”, who takes on Roy Nelson in another rematch at Bellator 200, spoke about an Emelianenko rematch at a press conference on Thursday and doesn’t sound optimistic about running back their epic fight back in Pride FC.

“It’s hard to say. There is no — I don’t have some special desire to fight him anymore, like I had before. Never say never, but I don’t think that fight will ever happen.”

Emelianenko and “Cro Cop” went to war back in 2005 for the Pride FC heavyweight championship, with the Russian emerging as the victor. Since then, both men have gone on to other things, with Filipovic going to the UFC before a failed USADA test forced him back to Japan and now currently in Bellator.

Emelianenko bounced around quite a bit since their fight, ending up in Strikeforce and now Bellator, both of which captained by Scott Coker.

”The Last Emperor” most recently destroyed former UFC heavyweight champion Frank Mir in less than a minute into the first round of their Bellator Heavyweight Grand Prix bout. Emelianenko will now advance to take on fellow semi-finalist Chael Sonnen. The winner of that fight will face the winner of Matt Mitrione vs. Ryan Bader for the Bellator heavyweight belt.

”Cro Cop” and Emelianenko have since become friends since their war 13 years ago, and by the sound of it, he doesn’t have any intention on fighting him again, despite the fact that the two now compete for the same promotion again.

Are you interested in a rematch between “Cro Cop” and Fedor Emelianenko?